Warren Buffett is the undisputed champion when it comes to investing. Learn how the master picks his investments in this course. 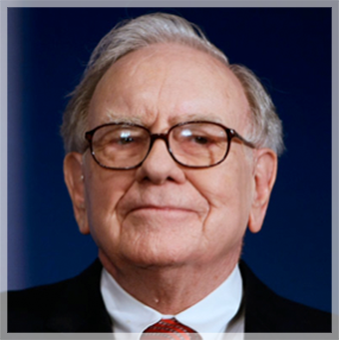 The Oracle is Born

Warren Buffett, a.k.a the “Oracle of Omaha”, is one of the wealthiest people on the planet and the most successful investor ever. Despite his humble appearance, Buffett is a natural born hustler.

Warren Edward Buffet was born in 1930 in Omaha, Nebraska to a stockbroker-congressman father and a homemaking mother. Young Buffett made his first investment at age 11 (three shares of Cities Service Preferred)! At 13 he had a paper route, and filed his first tax return, claiming a $35 tax deduction on his bicycle (a business expense, naturally).

After reading “The Intelligent Investor” by Benjamin Graham, Buffett made his way to Columbia University and went under the wing of Graham. Graham was a mentor to Buffet, and his concept of value investing would come to form the basis of Buffet’s investment strategy. In 1954, Graham scored Buffett a job as a security analyst at his firm, Graham-Newman Corporation. In 1956, with a capital base of $100,000, 25-year-old Buffett opened the very successful Buffett Partnership Ltd., through which he acquired a failing textile business called Berkshire Hathaway.

Buffett Partnership liquidated in ’69 but Buffett held on to Berkshire Hathaway, which he had turned profitable. Buffet began rerouting cash flow from the textile business into other investments, using Berkshire Hathaway as a holding company. Today, Berkshire Hathaway is the eighth largest public company in the world. Each year, thousands of Buffett devotees flock to Omaha for Berkshire Hathaway’s annual shareholder meeting, and the chance to hear a speech from the Oracle himself.

Interested in purchasing some Class-A shares of Berkshire Hathaway? That’ll be $129,000* each, please. 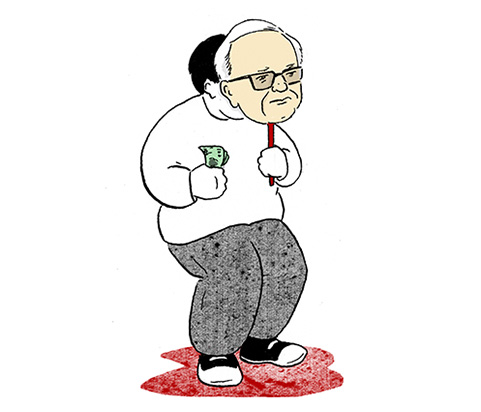 Warren Buffet is considered a value investor. Essentially, he selects stocks that are priced at a significant discount to what he believes is their intrinsic value. It is impossible to know the true value of a company, but Buffet works hard to calculate a conservative estimate and buy stocks that are disproportionately (low) priced.

Buffett’s particular brand of value investing is simple in theory yet difficult in practice. He filters the noise of the stock market, and focuses on the business itself – it’s practices and management. When Buffett buys stocks, he buys them for keeps. This requires a lot of discipline: it’s hard to resist buying or selling when the market seems perfectly ripe to act.

Buffett actively pursues companies that meet these criteria, but whose stocks he feels are undervalued by the market. Buffett views the stock market as temperamental. He doesn’t panic when stocks plummet, or celebrate when they skyrocket. Instead, the Oracle of Omaha maintains the “keep calm and carry on” mantra, only buying stocks he intends to hold indefinitely, if not forever.

“Whether we’re talking about socks or stocks, I like buying quality merchandise when it is marked down.”

Berkshire Hathaway maintains investments across a variety of industries: food, insurance, clothing, and newspapers, to name a few. Every year Warren Buffet writes a letter to Berkshire shareholders outlining the company’s holdings and any changes to it’s portfolio. Below are some of BRK’s largest and most noteworthy stock holdings (according to Berkshire Hathaway’s 13F SEC filing on February 14, 2013. Courtesy of CNBC.)

“In business, I look for economic castles protected by unbreachable ‘moats’” 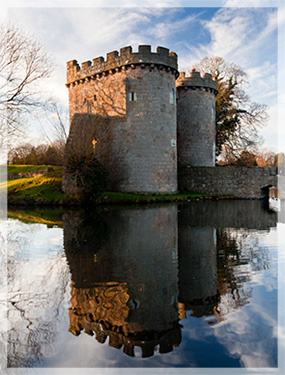 Economic Moat, a term created by Buffett, represents the sustainability of one company’s advantage over its competitors. Like a moat that protects a castle from invaders, an economic moat is a factor – a patent-protected recipe, a unique technology, a trusted brand name, etc. – that protects a company from its competitors. The wider the moat, the more sustainable the company’s advantage, and the harder it will be for competitors to infringe on its client base and its profits. A company with a wide moat will maintain it’s competitive advantage for a long time.

Coca-Cola is a good example of a company with a wide moat. There are other colas on store shelves and Pepsi regularly competes with Coke for vending machine real estate and TV product placements, yet Coke continues to dominate the market, and our collective consciousness. Coke’s moat, quite simply, is it’s trusted name and ubiquity.

Competition is a good thing. If one company consistently outperforms competitors in the same market, it drives those competitors to lower their prices, or improve their product, or both. On the one hand, a company’s moat amps up the competition, pushing competitors to significantly improve their products or drastically lower their prices. On the other hand, the perceived need for a moat can drive companies to seek out legal means (e.g. patents, copyrights) of protecting their products, which can lead to monopolies and inflated prices. 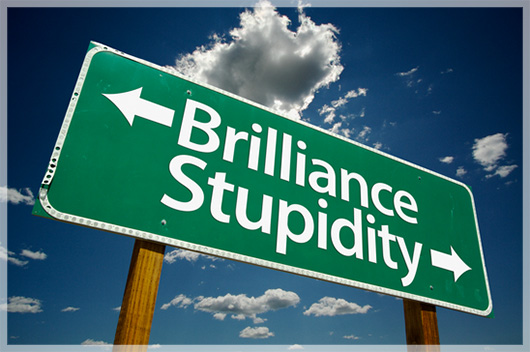 Sure, Warren Buffett has made many a sensible investment – Proctor & Gamble, Fruit of the Loom, IBM – but he’s also known for investing against the grain. It is, after all, the premise of value investing to buy stocks that other investors underestimate, or overlook altogether. In Step 3 we saw how Buffett defied common wisdom by investing in Coca-Cola and American Express, and made billions. Never one to follow trends, Buffett looks for good businesses, not good stock prices. Buffett likes to invest in companies that that provide a service or product that the he uses himself, like car insurance and Ketchup.

With this in mind, let’s consider Buffett’s recent (and let’s face it, dubious) decision to get into the local newspaper business. With people increasingly getting their news from free, online sources like Twitter, Huffington Post, and (believe it,) YouTube, the newspaper industry is just barely clinging to life. But this doesn’t sway the unshakeable Oracle of Omaha. In fact, it provides a window into his investment philosophy, and his character.

Buffett plans to buy local newspapers in strong, bonded, long-standing communities. He believes that if people care about their community, they will read their community newspaper, and when that paper eventually moves online, the people will follow it. In a letter to editors of papers he already owns, Buffett said this:

“We will favor towns and cities with a strong sense of community, comparable to the 26 in which we will soon operate. If a citizenry cares little about its community, it will eventually care little about its newspaper. In a very general way, strong interest in community affairs varies inversely with population size and directly with the number of years a community’s population has been in residence.” – As quoted on forbes.com

As of February 2013, Buffett owned 28 local papers, and in talks to buy many more. Buffett spoke at length about these acquisitions in his 2012 letter to shareholders. It seems unlikely that these papers will make Buffett much (if any) profit, but maybe that’s missing the point. Compared to its other holdings, local papers are but a speck in the BRK portfolio. It seems the World’s Greatest Investor is a builder of empires, and communities alike.

Watch your back, Rupert Murdoch!

“We believe that according the name ‘investors' to institutions that trade actively is like calling someone who repeatedly engages in one-night stands a ‘romantic.'” 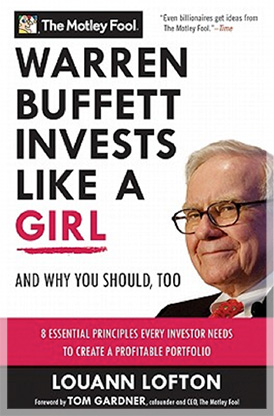 At a Berkshire Hathaway shareholder meeting, LouAnn Lofton, author of the book Warren Buffett Invests Like A Girl, asked Buffett if he thinks he invests like a girl. His response: “I plead guilty.” So what does it mean to invest like a girl? Tasteless phrasing aside, what Lofton was getting at is that Buffett is a cautious investor who trades infrequently and thinks about the future – tendencies which are more common among female investors than their male counterparts. Studies have compared investing habits in men and women and there is data to substantiate Lofton’s claim.

A study by economists Brad M. Barber and Terrance Odean found that men are 45% more likely to make trades than women, and single men are 67% more likely to trade than single women. The costs incurred from men’s increased trading activity actually decreased their net annual returns by 1%.  Buffett doesn’t like trading, his “favorite holding period is forever”.

Women tend to be better at controlling their egos and emotions. They are skeptical about the “next big thing”, more risk-averse, and don’t view the stock market as a casino. Buffett is the same: he isn’t caught up in the tumult of Wall Street, rather, he lives quietly in Omaha, making prudent choices, and accumulating wealth.

Surveys have shown that women are more likely to admit their lack of investing experience, and seek and follow financial advice. Men conversely, tend to be overconfident and more impulsive. Buffett makes a point of investing only after he has done extensive research.

Without a doubt, the most challenging aspect of value investing is calculating a company’s intrinsic value. This is a task at which Buffett is particularly adept. As we mentioned earlier, it is impossible to calculate the true value of a company, but it is possible to make a good estimate (though it requires a whole lot of data and math, yikes!). Here are two basic ratios to help you evaluate a company against its competitors.

Return on Equity (ROE) is a measure of how efficiently a company can generate profit with the money invested by its shareholders. ROE is expressed as a percentage. A relatively high percentage means a company is using equity more efficiently than its competitors.

Remember, each ratio represents just one piece of the puzzle. The more calculations you can do, and the more variables you can account for, the better off you’ll be. It is equally important to compare the results with those of competing companies.

“If you’re in the luckiest 1% of humanity, you owe it to the rest of humanity to think about the other 99%.”

The Oracle of Omaha, while thrifty, is no hoarder of cash. Buffett has pledged to give 99% of his wealth to charity over his lifetime and before his death. With the Bill and Melinda Gates Foundation, he is encouraging other extremely wealthy families to donate half of their wealth to charitable causes. You can read a statement of his philanthropic pledge on The Giving Pledge website.